The positive coronavirus test results for 14 nursing home residents who have been placed in isolated hospital wards were mistaken, with second test results coming back negative.

The elderly residents of an old-age home in Ashdod had been tested at the Weizmann Institute, and the test results of 29 further residents of the “Beit Hadar” assisted living facility in the coastal city are now also being re-examined, Channel 13 news reported Friday.

The Health Ministry told the broadcaster in a statement that an investigation has been opened and that the elderly residents have been isolated in the hospital to reduce the possibility of them becoming infected while a decision is made about their future care.

“There was a suspicion of a problem in one of the stages of the laboratory diagnostic process. The issue is currently undergoing a thorough investigation. Repeat tests on additional patients and caregivers will be made as needed,” the ministry said. “The patients who have been transferred to the hospitals are now in isolation, and the appropriate place for their continued care is being examined so that they do not become infected.”

Nine of the patients confirmed to not have COVID-19 were hospitalized at Assuta Medical Center in Ashdod and the rest at Barzilai hospital in Ashkelon and Kaplan hospital in Rehovot.

They were in special quarantined wards for coronavirus patients alongside confirmed carriers.

The incident cast doubts on test results for residents of other nursing homes, which are now also reexamining the results, with many also demanding a second test.

Nearly 40 percent of the COVID-19 fatalities in Israel were residents of elderly living centers, according to a Channel 13 news calculation, with the virus spreading fast through some facilities.

The death toll in Israel from the coronavirus rose to 149 Friday afternoon, an increase of six from the previous evening.

One of the victims, a 96-year-old woman, was the eighth fatality from the Maon Horim assisted living facility in Jerusalem, the Walla news site reported.

In addition, a 76-year-old woman succumbed to the coronavirus at Wolfson Medical Center in Holon, the hospital said, adding that she had preexisting illnesses.

A 91-year-old woman who was a resident of the Amal assisted living facility in Raanana died at the Meir Hospital.

An 84-year-old woman died at the Shaare Zedek Medical Center in Jerusalem, the hospital announced, adding that she also suffered from preexisting medical conditions.

A 66-year-old man from Haifa died at the city’s Carmel Medical Center, the hospital’s first fatality from COVID-19.

A man, 70, died at the Mayanei Hayeshua Medical Center in Bnei Brak.

There were no further details given on the identities of the victims. 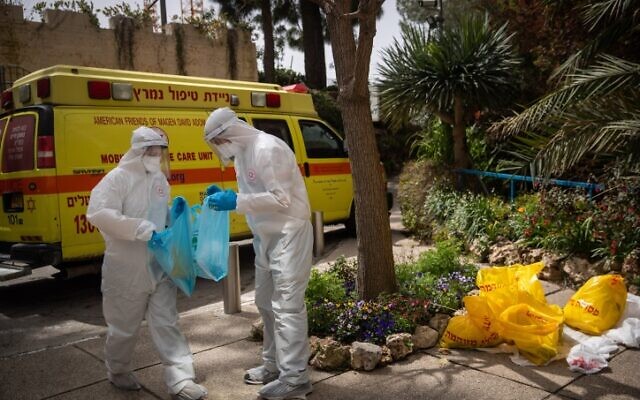 According to the Health Ministry’s latest figures, there have been 12,855 confirmed coronavirus cases in Israel.

The ministry said 182 people were in serious condition, 129 of them on ventilators. Another 157 people were in moderate condition and the rest had mild symptoms. There have been 2,967 Israelis who recovered from COVID-19.


I’m proud to work at The Times of Israel

I’ll tell you the truth: Life here in Israel isn’t always easy. But it’s full of beauty and meaning.

I’m proud to work at The Times of Israel alongside colleagues who pour their hearts into their work day in, day out, to capture the complexity of this extraordinary place.

I believe our reporting sets an important tone of honesty and decency that’s essential to understand what’s really happening in Israel. It takes a lot of time, commitment and hard work from our team to get this right.

Your support, through membership in The Times of Israel Community, enables us to continue our work. Would you join our Community today?


Join the Times of Israel Community

Already a member? Sign in to stop seeing this


You’re serious. We appreciate that!


We’re really pleased that you’ve read X Times of Israel articles in the past month.

That’s why we come to work every day – to provide discerning readers like you with must-read coverage of Israel and the Jewish world.

So now we have a request. Unlike other news outlets, we haven’t put up a paywall. But as the journalism we do is costly, we invite readers for whom The Times of Israel has become important to help support our work by joining The Times of Israel Community.

For as little as $6 a month you can help support our quality journalism while enjoying The Times of Israel AD-FREE, as well as accessing exclusive content available only to Times of Israel Community members.

Already a member? Sign in to stop seeing this