Health officials have admitted that giving 163 students at one of Australia’s most elite private schools the Pfizer Covid vaccine ahead of vulnerable groups was a mistake.

St Joseph’s College at Sydney’s affluent Hunter’s Hill confirmed to Daily Mail Australia on Tuesday that the Year 12 students were vaccinated last month, as millions of other less fortunate Aussies are forced to wait until the final quarter of this year.

With community outrage surging over why students at the $50,000-a-year boarding school were given their first shot of the Pfizer vaccine despite the jab not yet being available to under 40s, health bosses blamed an ‘error’.

Dr Teresa Anderson, Chief Executive of Sydney Local Health District which falls under NSW Health, said the jabs had been intended to vaccinate only Aboriginal students at the school.

Under eligibility guidelines, Indigenous Australians aged 16 to 49 are eligible for the jab which is in short supply nationwide.

‘It was agreed that the Aboriginal students would be vaccinated through the state health system at Royal Prince Alfred Hospital’s vaccination hub,’ Dr Anderson said in a statement.

‘Through an error, the wider group of boarders in Year 12, a total of 163 students, were also vaccinated. Sydney Local Health District apologises for this error.’

St Joseph’s College at Hunter’s Hill, Australia’s largest boarding school for boys, confirmed to Daily Mail Australia that 160 of its Year 12 students received the vaccine in May – despite the vaccine not being officially available to under-40s

‘We have a large number of boys who live in a residential community, which includes boys from rural, remote and indigenous communities,’ he said in a statement.

The revelation comes after the desperate family of a 90-year-old woman in a nursing home said they had tried and failed to get their mum the jab.

Sue Halford’s 90-year-old mother Barbara resides in a nursing home and is still yet to be vaccinated, after being told she may have to wait until September.

‘She’s waiting and I really think she needs to get her shot as a priority group 1A, 90-year-old in aged care, she really should have got her shot yesterday,’ Ms Halford told A Current Affair. 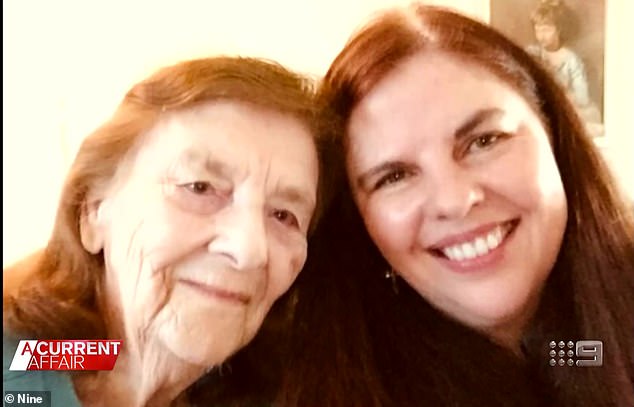 Due to medical concerns, Barbara requires the Pfizer jab but with stock in short supply due to the federal government’s bungled vaccine rollout, it meant she may have to wait until the final quarter of the year.

‘I know it’s supposed to be coming September 1, but there’s still how long until then? So it needed to happen yesterday,’ Ms Halford said.

Despite the apparent shortage, NSW Health and Sydney Local Area Health District responded to the school’s request and arranged vaccinations at an approved site.

Mr Tarlinton pointed out the school, which charges $35,800 for day students, and $50,000 for boarders, does not decide who gets what vaccine.

‘Acknowledging that the college does not determine vaccination priority, it welcomed the opportunity to offer the vaccine for students given the approvals provided and for the reasons listed above,’ the statement read.

Mr Tarlinton said he and the college would ‘continue to encourage and support members of its community to receive the appropriate vaccine as the opportunity arises’. 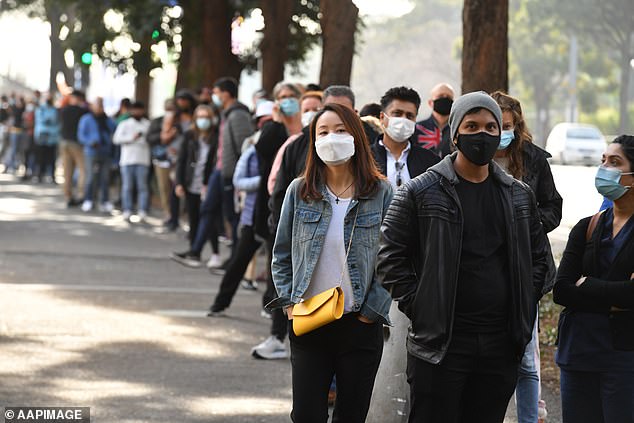 Australians have been waiting in long queues to receive Covid vaccines, but the Year 12 students from an elite Sydney boys’ school was bussed to a NSW Health venue to receive Pfizer jabs nearly two months ago

Because Pfizer is in short supply in Australia, it is not yet available to people under 40.

Instead, younger Australians can only get the abundant AstraZeneca vaccine via their GPs because the government is prioritising Pfizer jabs for people aged 40 to 60.

Young Australians are not expected to be able to choose their vaccine until at least September.

AstraZeneca, which is only recommended for people over 60 because of extremely rare but serious blood clots, has a 12-week gap between doses, while Pfizer has a three-week space.

Covid-19 vaccine task force head John Frewen was quizzed about September or October being realistic markers for Pfizer to be expanded to under-40s.

‘On the current supply forecasts that we have then I think that’s when we’re getting closer to having greater choice,’ he told reporters in Canberra.

‘But I won’t tie myself to specific dates at this stage.’ 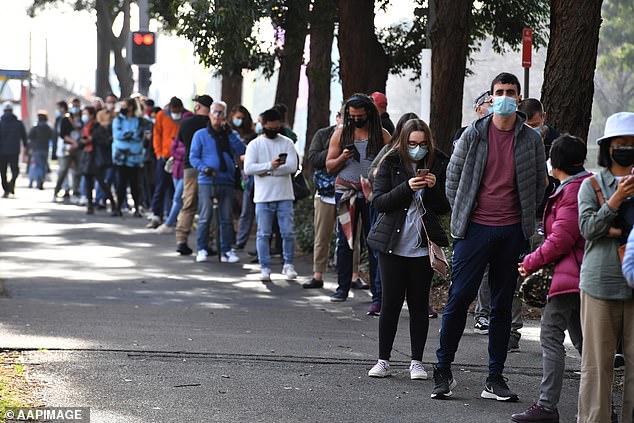 In a major change in the vaccine rollout strategy, Prime Minister Scott Morrison last week suggested people under 60 could discuss getting Astra Zeneca with their doctor – although it is not advised by medical authorities because of a low risk of blood clotting

But he said as soon as supplies of Pfizer and the yet-to-be approved Moderna jab were available other options would be on the table.

State and federal health officials met on Tuesday to discuss potential problems with the rollout, including possible staff shortages.

Some officials are concerned there may not be enough workers available to roll out vaccines quickly and easily when tens of millions of Pfizer and Moderna doses arrive later this year.

They are considering options including drafting in trainee paramedics or final year medical students.

‘We’re looking for every opportunity we can to accelerate the rollout,’ Lt Gen Frewen said.

Jane Halton, who chairs the Coalition of Epidemic Preparedness Innovations, said Australia needed to be prepared for glitches in vaccine delivery. 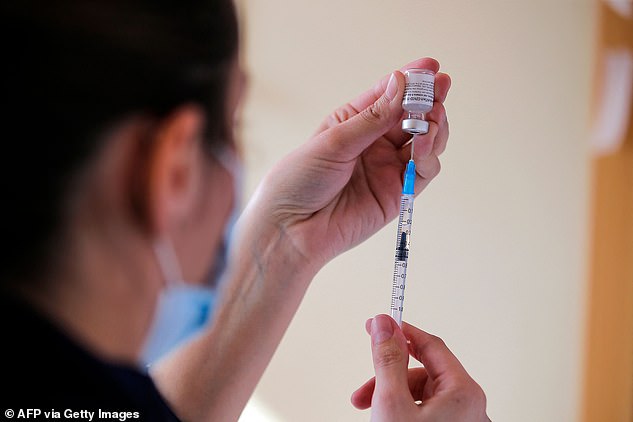 Younger Australians can only get the abundant AstraZeneca vaccine via their GPs because the government is prioritising Pfizer jabs for people aged 40 to 60. Young Australians are not expected to be able to choose their vaccine until at least September

‘This is not something that you can just stick on general practice across the country and then get that huge number of people through,’ she told ABC radio.

‘The federal government is starting to sit in a really co-operative way, not just with the states, but working with industry, who are really desperate to help their workforces get vaccinated as well.’

State governments are jostling to get their hands on the doses, with NSW Health Minister Brad Hazzard likening the rollout to The Hunger Games.

Mr Hazzard concedes a global contest for vaccine supplies is providing to be a major problem.

‘This is a war and the federal government is doing their best to try and get vaccines,’ he told ABC radio.

Almost 9.5 per cent of Australians aged over 16 have been fully vaccinated.

Labor leader Anthony Albanese said the government had gone from being complacent last year when it claimed to be at the front of the vaccine queue to being incompetent.

‘Australia is last in the developed world when it comes to fully vaccinating our population,’ he told reporters in Brisbane. 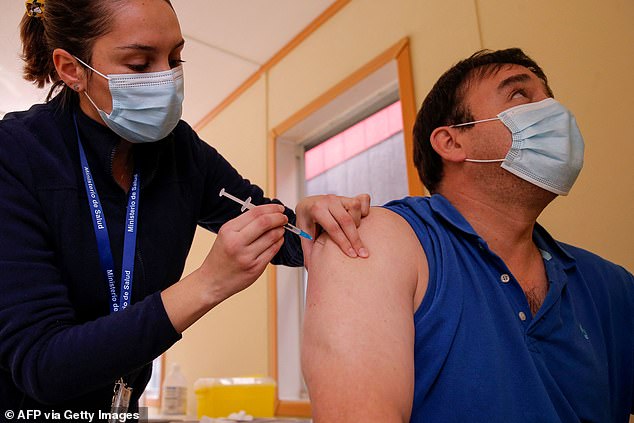