Merrick Garland Is Exactly The Kid You Hated In Law School 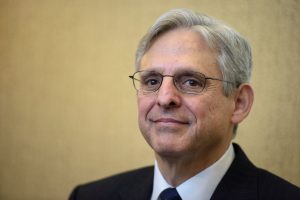 It’s probably not a surprise that a lawyer accomplished enough to be a rightful Supreme Court justice and actual Attorney General would be an annoying gunner, but Merrick Garland decided to remove all doubt yesterday when his Department of Justice decided to piggyback on the previous administration’s position that when presidents defame sexual assault victims it’s entirely within the scope of employment.

Right there in the Article II: “The President shall be Commander in Chief of the Army and Navy of the United States and to say his alleged rape victims are ‘not my type.’” OK, so maybe the Constitution doesn’t really say that, but it’s in the “Original Public Meaning” of the language.

One might have thought the change in administrations would lead to a change in positions, especially since the DOJ raised the claim in transparent bad faith in the first place. But Garland’s here like everyone’s least favorite law student to offer “more of a comment than a question” to the Second Circuit.

Then-President Trump’s response to Ms. Carroll’s serious allegations of sexual assault included statements that questioned her credibility in terms that were crude and disrespectful. But this case does not concern whether Mr. Trump’s response was appropriate. Nor does it turn on the truthfulness of Ms. Carroll’s allegations. The case instead addresses whether the Federal Tort Claims Act (FTCA) and the Westfall Act apply to the President and the scope of their application—questions that implicate the institutional interests of the federal government. The district court’s resolution of those issues was erroneous, and the government respectfully urges the Court to reverse the decision of the district court.

Except that’s the answer to a question that no one genuinely asked. No one with a lick of legal acumen thought defaming citizens implicated the FTCA in the first place, let alone whether or not it fell within one of its exceptions. The whole thing was cooked up by a boiler room of former FedSoc bros in an RFK Building conference room high on Chick-fil-A. But soldier forward with this argument the DOJ will!

You could argue that Garland’s just trying to protect the institutional credibility of the DOJ by refusing to turn it into a political pinball that careens from one position to the next with every election. An admirable goal for questioning the interpretation of maritime cargo regulations but complete lunacy when it comes to imagined legal trickeration to pawn a president’s straightforward tort liability off on the taxpayers. If that’s Garland’s take then he’s incentivizing every DOJ to push the envelope on bonkers legal theories in an effort to handcuff future administrations.

And that may be what’s driving Garland, but I can’t get over the possibility that he’s just unable to get out of his own head. He’s exactly the guy who responds to the hypo pontificating for five minutes about the Rawlsian veil of ignorance and the dangers of a slippery slope. “Well, if we let presidents face civil claims for slandering assault victims, where does it stop?”

There. It stops right there.

Maybe he’s crazy like a fox and knows the Second Circuit will laugh off this claim the same way Judge Kaplan did and then he can quietly decline to file cert and let it go away. The odds are certainly in his favor if this is the plan, though it’s a little too clever by half when “just dropping the appeal in the first place” has a 100 percent chance of success and not a single non-cynical person would question the decision.

We’ll see if this is the strategy, but until then we’re left with the United States of America taking the official position that its chief executive is allowed to commit torts with near impunity while in office, arguably to “protect” the institution of the Department of Justice.

Joe Patrice is a senior editor at Above the Law and co-host of Thinking Like A Lawyer. Feel free to email any tips, questions, or comments. Follow him on Twitter if you’re interested in law, politics, and a healthy dose of college sports news. Joe also serves as a Managing Director at RPN Executive Search.