The oil and gas explorers they managed went under, but they walked out with a combined $199 million in cash.

That’s how much 76 executives behind the 25 largest U.S. oil and gas bankruptcies between 2018 and 2020 received in cash bonuses, retention payments and severance, advocacy group Public Citizen said in a report Thursday. Meanwhile, more than 10,000 of their employees lost their jobs, the group said.

The shale boom that made the U.S. the world’s largest oil producer was bankrolled by hundreds of billions of dollars in debt. Two market crashes since 2014 have led scores of producers to go under. 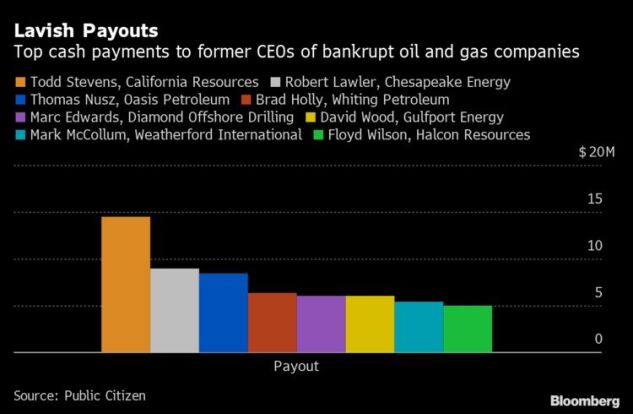 “The fossil fuel industry has been a poster child for ill-conceived corporate welfare for decades, benefiting from numerous subsidies, tax breaks and regulatory favors,” , president of Public Citizen, said in a statement.

To be sure, most shale producers have made spending discipline, debt reduction and investor returns their main focus since the pandemic-driven market collapse of last year. Producers’ earnings have rebounded this year, and their balance sheets were strengthened by a rally in oil and gas prices.

Oil and gas executives got an average $2.6 million cash payout each following bankruptcy, according to the report. The study excluded other forms of compensation.

The report also pointed out that the companies that were analyzed purchased only $281 million in bonds to cover environmental losses, less than 20% of their own estimated environmental liabilities.

The group is calling on U.S. President and lawmakers to eliminate subsidies to the oil and gas industry, update leasing laws and ensure taxpayers aren’t saddled with the cost of well cleanups.

To contact the reporter on this story:
in New York at jjoshua7@bloomberg.net

To contact the editors responsible for this story:
at scasey4@bloomberg.net