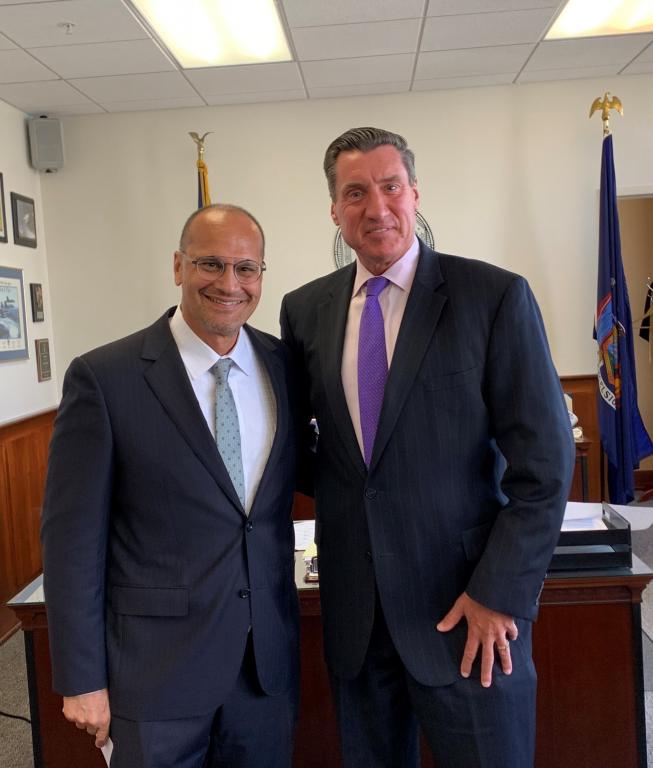 Giacobbe left private practice as a partner in The Law Offices of Jaworski & Giacobbe to serve as a member of Flynn’s leadership team. Since July 2006, his work primarily focused on Driving While Intoxicated cases and other criminal defense matters. Giacobbe also has extensive civil trial practice experience, including personal injury, real estate, estate litigation, matrimonial, and family law.

Giacobbe previously served as a prosecutor in the Erie County District Attorney’s Office from 1993 to 2005. During his nearly 12 years as an Assistant District Attorney, he prosecuted and supervised thousands of criminal cases. He was the Chief of the former DWI Bureau (now the Vehicular Crimes Unit), responsible for overseeing all driving while impaired cases.

Giacobbe graduated from Canisius College with a Bachelor of Arts degree in 1988. He received his Juris Doctor degree from Cleveland-Marshall College of Law in 1991.

District Attorney Flynn appointed Mara L. McCabe to serve as Deputy District Attorney-Training, a newly created role as part of his leadership team. McCabe will be responsible for all training and special projects and oversee the office’s Community Prosecution and Training Bureau.

McCabe has served as an Assistant District Attorney in the Erie County District Attorney’s Office since 2005. She has prosecuted thousands of criminal cases during her career, including crimes against children while working in the office’s Special Victims Bureau (now the Special Victims/Domestic Violence Bureau). McCabe was previously appointed as a Chief to lead the Buffalo City Court Bureau and the Felony Trials Bureau where she was responsible for overseeing the caseloads of newly appointed Assistant District Attorneys.

In 2019, District Attorney Flynn established the Training and Special Projects Bureau to manage all legal training for the office, which McCabe has led since its inception. McCabe was responsible for implementing protocol and procedure changes in our office to comply with newly enacted criminal justice legislation. She provided training for prosecutors and law enforcement in Erie County on bail, discovery and other reforms. She has also represented our office in statewide committees and community forums on the criminal justice reform legislation.

In 2020, McCabe received the “Law Enforcement Achievement Award” from the Erie County Law Enforcement Foundation Award for her work in preparing our office and local law enforcement for criminal justice reforms that went into effect in January of that year.

McCabe serves on the board for Continuing Legal Education program, which provides in-house legal training for prosecutors in New York State.

Prior to joining the office, McCabe was an attorney at Hogan Willig, PLLC where her work focused on personal injury and medical malpractice cases.